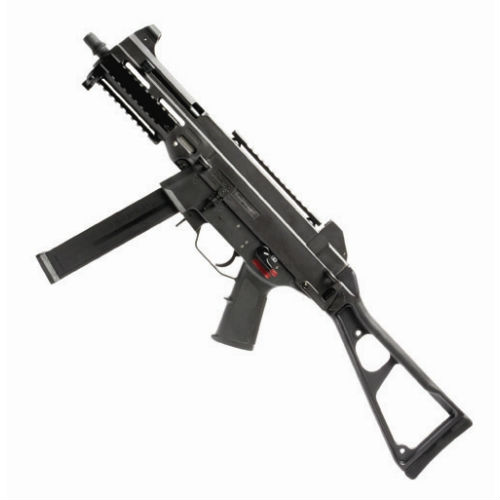 The UMG from G&G is the latest version of this model. The manufacturer has eliminated all the flaws of previous models. The replica like the real steel counterpart is made almost entirely of ABS. Body, folding stock, trigger and all manipulators are made with high precision, and the material they are made of ensure long and reliable operation. Dark gray color and matt texture even further  make the replica resemble the original model. All parts are well-fitted and have no backlash. The slotted right-side folding buttstock is finished with a rubber pad. The part of the buttstock, which has contact with the shooter’s cheek is also covered with a layer of rubber. This, combined with simple sights, known from other HK models guarantees quick and easy aiming.

This replica is equipped with four RIS rails. Three short ones are on the sides of the body and a longer one on the top. Four rails give the shooter tremendous flexibility in installation of additional accessories such as red dot sights, tactical lights or laser pointers. The lower rail has a bilateral tactical sling swivel.
Thanks to the fully functioning bolt catch the bolt can be locked in the rear position of the slide. Thus, the operator gains access the hop up system. After pressing the bolt catch again, the bolt dummy is released and moves to a forward position.