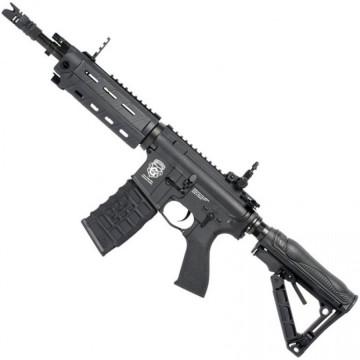 The G&G’s company GR4 G26 replica. Glass fiber reinforced plastic and metal (aluminum) were used to make this construction. The main parts (body, frontgrip, stock) are made of plastic.

The firing mode selector lever is located on the left side of the replica and it is marked with graphics identifying the firing modes. The replica is equipped with the PBB system which perfectly imitates the operation of the original firearm. It makes the bolt carrier dummy move and gives a perceptible effect of the replica kicking the shooter’s shoulder.

After pulling the cocking handle, the dust cover opens and the bolt carrier’s imitations moves backwards. This allows to adjust the Hop-Up system.  What is important, the actuator plays a vital role here: upon pushing it, the anti-reverse which is located in the gearbox is released thanks to what the main spring is lose. This significantly increases the main spring’s lifespan what allows to keep the high muzzle velocity and use the main spring at the lowest possible level.

The replica was made in black color. It is perfect for fighting on short and middle distances due to the use of the M110 main spring that guarantees the muzzle velocity of about 360 FPS. The use of double top RIS rail allows for the attachment of any given optical aiming device. The battery is located inside of the front-grip.

The GR4 G26 carbine replica is perfect as a primary assault weapon. Thanks to the proper barrel length and the sealed pneumatic unit and the high quality Hop-Up chamber it became possible to reach a reasonable muzzle velocity and to keep a stable BB pellet’s trajectory and great range. The basic muzzle velocity is reasonable in order to sue the replica safely and effectively in the CQB/MOUT type games and also in open areas. The tactical flashlight and the laser target market which are powered with a single CR123 battery and which are located in the front grip are a nice surprise for the user.

An extraordinary Blow-Back system, known from the Top Tech replica ( the more “professional” and what follows it – the more expensive G&G line ), provides additional realism for the user of the replica and ensures additional experiences for the user himself.

ATTENTION: The manufacturer does not recommend using batteries stronger than 8,4V due to the fact of the possibility of damaging the aforementioned plate.

The gearbox is equipped with 8mm metal ball bearings, a brass cylinder head and an aluminum piston head.