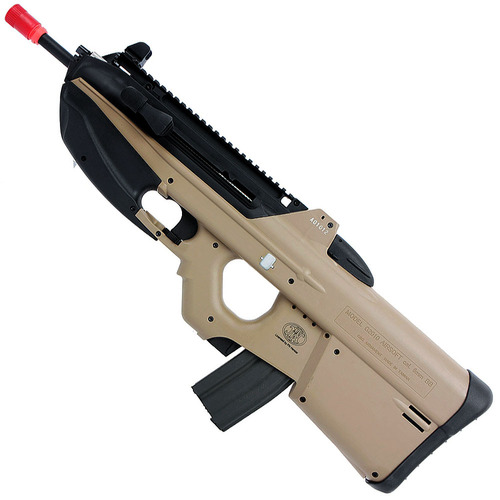 The FN F2000 rifle replica is made by the G&G company and was made under the license given by the Cybergun company. Thanks to this it was possible to engrave the markings on the replica that match the markings of the real firearm. The fame of the G&G company guarantees the highest quality of make, the operating culture and the perfect fitting of the elements.

The replica was made of plastic and metal elements. The parts made of metal – and to be precise of a CNC made aluminum – are the RIS rails, the scope, the magazine, the barrel and some minor elements of the body’s construction. On the other hand, the elements made of plastic are the body, the magazine release lever, the scope cover and some other minor elements. The material used in this construction is an extremely durable nylon fiber, the same used in the real firearm. The materials are used just like in the real firearm.

The replica has got the advantages of the original – the top RIS rail allowing the attachment of additional optical sights and additional accessories. It is also equipped with a comfortable firing mode selector. Thanks to its construction the replica is perfect for both left and right handed shooters. This is influenced by the type of the firing mode selector used in the replica ( it corresponds with the known FN P90 model ),  the ambidextrous magazine release lever and the ambidextrous tactical sling attachment point.

With no doubt, the long inner barrel is surely one of the most important features of this model ( in relation to the overall length of the replica ). This allows to gain high precision and a great accuracy of the shots while keeping the compact size of the replica that influences the replica’s comfort of use.

The replica is equipped with a system of adapting its power very fast allowing to increase or decrease the replica’s muzzle velocity in 10 % of the stock muzzle velocity in a matter of seconds.  Thanks to this, it is possible to use one replica in CQB events and in assault operation on open territories.

The replica is equipped with a scope with a fixed 3,5 magnification. The scope is factory mounted on the RIS rail. A special cover keeps the scope safe from damage and dirt preserving the ability to observe through the scope at the same time. It is fed by the STANAG 5.56mm magazine replicas that are used typically by the M4 replicas.